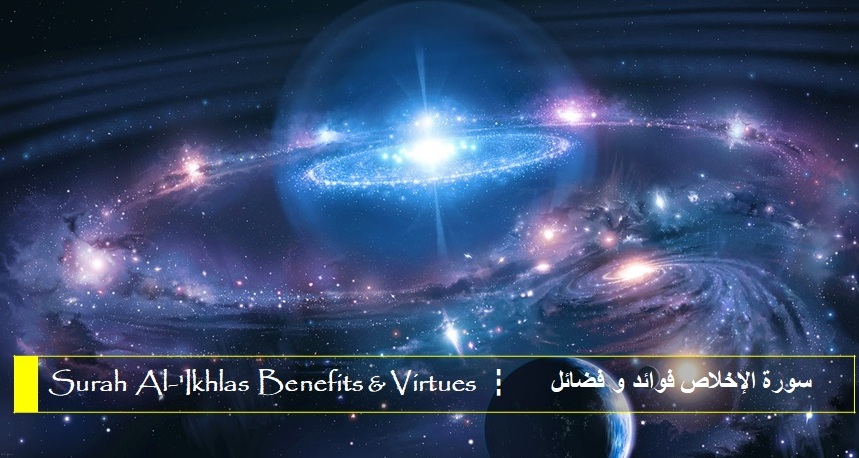 The Prophet (صلى الله عليه وعلى آله وسلم) said to his companions, “Is it difficult for any of you to recite one third of the Qur’an in one night?” This suggestion was difficult for them so they said, “Who among us has the power to do so, O Allah’s Messenger (صلى الله عليه وعلى آله وسلم) ?” Allah Apostle replied: ” Allah (the) One, the Self-Sufficient Master Whom all creatures need.’ (Surat Al-Ikhlas 112.1–to the End) is equal to one third of the Qur’an.”

Whenever the Prophet (صلى الله عليه وعلى آله وسلم) went to bed every night, he used to cup his hands together and blow over it after reciting Surat Al-Ikhlas, Surat Al-Falaq and Surat An-Nas, and then rub his hands over whatever parts of his body he was able to rub, starting with his head, face and front of his body. He used to do that three times.

During the two Rak’ah of Tawaf, the Messenger of Allah recited the two Surat of Ikhlas, “Say: O you disbelievers!” and: “Say: He is Allah, (the) One.”

112.5 It was narrated from Abu Hurairah

112.6 ‘Abdullah bin Khubaib (May Allah be pleased with him) reported

The Messenger of Allah (ﷺ) said to me, “Recite Surat Al-Ikhlas and Al- Mu’awwidhatain (Surat Al-Falaq and Surat An-Nas) three times at dawn and dusk. It will suffice you in all respects.”

112.7 Anas (May Allah be pleased with him) reported

Whenever Allah’s Messenger (ﷺ) went to bed, he used to recite Surat-al-Ikhlas, Surat-al-Falaq and Surat-an- Nas and then blow on his palms and pass them over his face and those parts of his body that his hands could reach. And when he fell ill, he used to order me to do like that for him.

A man heard another man reciting: Surat-ul-Ikhlas (The Unity) ‘Say: He is Allah, the One (112) and he was repeating it. The next morning he came to Allah’s Messenger (ﷺ) and mentioned the whole story to him as if he regarded the recitation of that Sura as insufficient On that, Allah’s Messenger (ﷺ) said, “By Him in Whose Hand my soul is! That (Sura No. 112) equals one-third of the Qur’an.”

112.14 It is reported on the authority of Abu Huraira

Messenger of Allah, (ﷺ) appointed a man in charge of an army unit who led them in Salat (prayer); he always concluded his recitation with Surat Al-Ikhlas: “Say (O Muhammad (ﷺ)): ‘He is Allah, (the) One. Allah-us-Samad (Allah – the Self-Sufficient). He begets not, nor was He begotten. And there is none equal or comparable to Him.”‘ (112:1-4) Upon their return to Al-Madinah, they mentioned this to Messenger of Allah (ﷺ), who said, “Ask him why he does so?” He was asked and he said, “This Surah contains the Attributes of Allah, the Gracious, and I love to recite it. Messenger of Allah (ﷺ) then told them, “Tell him that Allah loves him”.

* It appears that the speaker is Ja’far bin Muhammad who is narrating from his father, from Jabir.
**And they say that the meaning if ‘your furniture’ or, ‘your special place’ in which case the objective is to say that the wife is not to admit anyone in the house whom the husband would be displeased with.
***Sakharat plural of Sakhrah rock or boulder. Nawawi said: “They are the rocks that lay at the base of the Mount of Mercy, and it is the mount in the middle of ‘Arafat.”

That he offered the sunset prayer behind Ibn mas’ud, when he recited “Say:
He is Allah, the One” (Surah 112).

112.19 It was narrated from ‘Abdur-Rahman bin Abi Laila that his father Abu Laila said:

“I was sitting with the Prophet (ﷺ) when a Bedouin came to him and said: ‘I have a brother who is sick.’ He said: ‘What is the matter with your brother?’ He said: ‘He suffers from a slight mental derangement.’ He said: ‘Go and bring him.’” He said: “(So he went) and he brought him. He made him sit down in front of him and I heard him seeking refuge for him with Fatihatil-Kitab; four Verses from the beginning of Al-Baqarah, two Verses from its middle: ‘And your Ilah (God) is One Ilah (God – Allah),’ [2:163] and Ayat Al-Kursi; and three Verses from its end; a Verse from Al ‘Imran, I think it was: ‘Allah bears witness that La ilaha illa Huwa (none has the right to be worshipped but He),’ [3:18] a Verse from Al-A’raf: ‘Indeed, your Lord is Allah,’ [7:54] a Verse from Al-Mu’minun: ‘And whoever invokes (or worships), besides Allah, any other ilah (god), of whom he has no proof,’[23:117] a Verse from Al-Jinn: ‘And He, exalted is the Majesty of our Lord,’ [72:3] ten Verses from the beginning of As-Saffat; three Verses from the end of Al-Hashr; (then) ‘Say: He is Allah, (the) One,’ [112:1] and Al-Mu’awwidhatain. Then the Bedouin stood up, healed, and there was nothing wrong with him.”

112.21 It was narrated from Ibn Abdur-Rahman bin Abza from his father that

The Messenger of Allah (ﷺ) used to recite in witr: “Glorify the Name of Your Lord, the Most High;’ and “Say: O you disbelievers!’; and ‘Say: He is Allah, (the) One.” And after he had said the salam, he would say: Subhanal-Malikil-Quddus (Glory be to the Sovereign, the Most Holy) raising his voice the third time.”

Whenever the Messenger of Allah (ﷺ) went to bed, he would blow upon his hands recite Al-Mu’awwidhat; and pass his hands over his body.

“The Messenger of Allah (ﷺ) ordered me to recite Al-Mu’awwidhatain at the end of every Salat.”

“The Messenger of Allah(S.A.W) would seek refuge from the jinn and the (evil) eye of humans, until Al-Mu’awwidhatain were revealed. So they were revealed he used them and left other than them.”

That the Prophet (peace and blessings of Allaah be upon him) heard a man reciting Qul huwa Allaahu ahad, and said, “It is his right.’ They asked, ‘O Messenger of Allaah, what is his right?’ He said, ‘Paradise is his right.’

That Rasualllah(صلى الله عليه وسلم) has said, “If anyone recites 200 times everyday Surah Ikhlas 200 of his (minor) sins committed over 50 years will be blotted out of his record; but, if he has to pay loan to anyone, that will not be forgiven.”

The Holy Prophet sallallahu alaihe wasallam as saying, “If anyone recites two hundred times daily, Qul huwallahu ahad the sins of fifty years will be wiped out, unless he is in debt.” Tirmizi and Darami transmitted it. The latter version has ‘fifty times’ and he did not mention ‘unless he is in debt’.

Another version does not mention ‘unless he is in debt’

The saying of Rasulallah صلى الله عليه وسلم that, “If anyone who is about to sleep on his bed lies on his right side, then recited Al-Ikhlas 100 times, Allah will say to him on the Day of the resurrection, ‘My slave, enter Paradie to your right side.'”

112.33 Whoever passes by a grave and recites Surah Al Ikhlaas 11 times and gave the rewards to the dead, he will be awarded rewards equal to the number of how many dead people they are there

112.34 Whoever prays Fajr and then recites Surah al ikhlaas 100 times before he speaks to anyone, then for each Surah Ikhlaas he recite , he is forgiven the sins of a whole year

112.35 Whoever recites surah ikhlas 10 times after every fardh salah he can enter jannah on the day of judgement from any door he wishes and will get any hoor he wishes.

112.36 The Prophet (s.a.w) said ” O Uqbah, should I not teach you a surah which the like of it was not sent in the Torah nor in the Zabur, nor in the Injeel and even in the Furqaan – there are no comparisons for them…. (They are): Surah Al Ikhlaas, Al Falaq and al Naas

112.37 “Recite the Muwadathayn (Al Falaq and Al Naas) after every prayer

112.39 A man complained of poverty and constrained circumstances to the Messenger of Allah (Allah bless him and give him peace), so he said (Allah bless him and give him peace), “When you enter the house, say the salams whether or not anybody is present, send blessings upon me, and then recite ‘Say, ‘He is God the One…” once.”” The man did so, and Allah rained sustenance down upon him until he spent upon his neighbours and relatives.

112.40 “Whoever recites ‘Say, ‘He is God the One…” when he enters his house, poverty is warded from the people of the house and the neighbours.”

112.41 That a man once complained to the Prophet (peace and blessings of Allah be upon him) of poverty and restricted living conditions. So the Messenger of Allah said to him:‘When you enter the home, then perform Salam [on the inhabitants] if someone is home. And if no-one is home then perform Salam upon me and recite Surah Ikhlas once.’The man began to perform this practice, and as a result he became so rich that the wealth over-spilled to his neighbours too.

(Tafsir al-Qurtubi, Under the commentary of Surah al-Ikhlas).

“Whoever accomplishes three things with a sound iman will enter paradise from any of its Gates, and will be married to the pure wives of his choice. He who forgives a murderer of kin; he who settles debts on another person secretly; and he who recites 10 times after every Fard-compulsory prayer Surah Ikhlas.” Abu Bakr said: “or even doing any of these, O Messenger of Allah?” the Holy Prophet (s) then said: “or one of them.”

112.43 “When you recite Surah Fatiha and Surah Ikhlas upon lying on your bed, you will be safeguarded and should become fearless of everything except death.”

112.44 “Whoever reads Surah Ikhlas until he finishes it, ten times then Allah builds a Palace for him in Paradise as well as additional benefits.”Umar said: ‘Then we will have a lot of Palaces O Messenger of Allah! The Prophet said: Allah has more and what is better.’

112.45 “Whoever recites Qul Huwa Allaahu Ahad ten times; Allah will build for him a house in Paradise.”

112.46 “If anyone recites two hundred times daily, Qul huwallahu ahad the sins of fifty years will be wiped out, unless he is in debt.” (Tirmidhi)

112.47 “Whoever reads surat qul hu-wallaahu ‘ahad every day two hundred times, allah will grant him one thousand five hundred rewards and will erase from him the sins of fifty years, unless he has debts.”

Of a man who asked Allah’s Messenger sallallahu alaihe wasallam which Surah of the Qur’aan was greatest and was told that it is Qul huwallahu ahad. He asked which verse of the Qur’aan was greatest and he replied that is the throne verse, Allahu laailaaha illa huwal hayyul qayyoom. He asked, “O’ Prophet of Allah (sallallahu alaihe wasallam) which verse would you like to bring good to you and your people?”

“If Allah Almighty had wanted to punish the Ummah of Sayyiduna Muhammad sall Allāhu ‘alayhi wa sallam he would have never blessed them with [the month of] Ramadhan and Sūrah al-Ikhlās.

2 thoughts on “Benefits and Virtues of Surah 112 Al-Ikhlas”