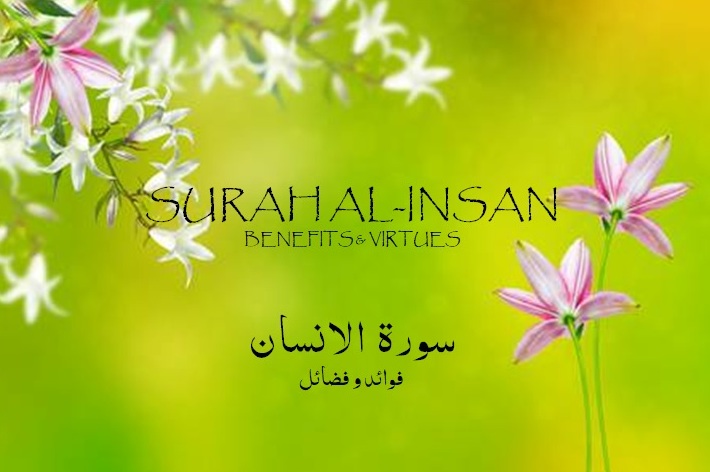 I heard Allah’s Messenger (صلى الله عليه وآله وسلم) as saying: Allah (سبحانه و تعالى) said: “The son of Adam (عليه السلام) abuses Dahr (the time), whereas I am Dahr since in My Hand are the day and the night.”

Indeed, We guided him to the way, be he grateful or be he ungrateful (76:3)

It has been recorded by Muslim in a Hadith from Abu Malik Al-Ash’ari (رضي الله عنه) who said that the Messenger of Allah (صلى الله عليه وآله وسلم) said, “All of mankind wake up in the morning as merchants of their own souls. So one either imprisons it or sets it free.”

In the Sahih, there is a Hadith which states, “The best charity is that which you give while you are healthy, covetous, hoping for wealth and fearing poverty.”

And they give food in spite of love for it to the needy, the orphan, and the captive,

Ata’ reported that Ibn ‘Abbas (رضي الله عنه) said: “It happened that ‘Ali ibn Abi Talib (رضي الله عنه) hired himself one night to water some palm-trees in exchange for some barley. The following morning, he collected his barley and grinded a third of it out of which they made something to eat, called al-Khazirah.

When it was cooked, a poor man came begging from them, and so they gave him the food they had prepared. They then prepared a third of the remaining barley and when it was cooked, an orphan came begging from them, and they gave him the food. They then went and prepared what was left of that barley, but when the food was cooked, a prisoner from among the idolaters came to them and they fed him that food and spent the rest of the day without eating anything. This verse was revealed about this incident”.

And when you look there [in Paradise], you will see pleasure and great dominion (76:20)

An Abyssinian man visited the Messenger of Allah (صلى الله عليه وآله وسلم) and said, “O Messenger of Allah, you have been favored over us in color, appearance and prophet-hood. What do you think that if I believe in Allah and do good deeds like you, will I be with you in the Heaven?” So the Prophet said, “Yes, by the One in Whose Hand my life is! Undoubtedly, the brightness of a dark man will be visible from a distance of 1000 years in the Paradise.” Then the Prophet said, whoever says

There is no god except Allah

Allah will fulfill His promise to him and whoever says

Glory be to Allah and His is the Praise

(Allah is free from imperfection, and I begin with Praising Him)

1,24,000 good deeds are written for him. Then Surah Ad-Dahr (Al-Insan, Surah 76) was revealed to the Prophet and he recited it up to

And when you look there [in Paradise], you will see pleasure and great dominion (76:20)

The Abyssinian said, “Can my eyes see what your eyes see in the Paradise?” The Prophet replied in the affirmative. The Abyssinian felt ill and his soul left the world. Ibn Umar said, “I saw the Messenger of Allah putting him in the grave with his blessed hands.”

The Messenger of Allah (صلى الله عليه وآله وسلم) recited Hal Ata Aala al-Insani Heenun Mina ad-Dahri (Surah 76) till the end and then said, “Verily, I see that which you do not see and I hear that which you cannot hear. The sky is chirping and it has to do so. (Because) It does not have a space of four fingers but some angel of Allah is prostrating there. By Allah! If you knew what I know, you would laugh a little and weep more. And you would not be pleased by sleeping with your women. And certainly you would migrate to the mountains for refuge.”

76.9 There is a tradition from the Prophet (صلى الله عليه وآله وسلم) that says

“One who studies Surah Hal-Ata will be rewarded Heaven and clothes of silk (in Heaven) by Allah.”

“If a person frequently recites Surah Al-Insan, he will have a strong spirit.”

Imam Jafar As-Sadiq (عليه السلام) is also reported to have said that the recitation of Surah Al-Insan will strengthen one’s spirit and nerves (memory) and will keep anxieties away.

“One who recites Surah Al-Insan in the morning of every Thursday, Allah would marry him to 800 virgin women and 4000 women who had been married previously and give him one more Hoor-ul-Ain and the company of Muhammad (صلى الله عليه وآله وسلم).”

(i) To increase the means of sustenance (Rizq), wealth and fulfill wishes, recite Surah Ad-Dahr 75 times daily for 21 days.

(ii) To increase peace and love in marital relationship, recite Surah Ad-Dahr 11 times daily for 11 days on water and give it to your husband.

This is an admonition: whosoever will, let him take a (straight) Path to his Lord. But ye will not, except as Allah wills; for Allah is full of Knowledge and Wisdom. He will admit to His Mercy Whom He will; but the wrongdoers – for them has He prepared a grievous Penalty. (76:29-31)

of Surah Ad-Dahr 17 times daily for 40 days on water and it should be given to the patient for drinking.

(v) To get rid from an abusive/evil person, recite the verses

It is We Who have sent down the Qur’an to thee by stages. Therefore be patient with constancy to the Command of thy Lord, and hearken not to the sinner or the ingrate among them. (76:23-24)

(i) To keep having gratitude in trials, recite the verses

Has there not been over Man a long period of Time, when he was nothing -(not even) mentioned?  -Verily We created Man from a drop of mingled sperm, in order to try him: so We gave him (the gifts), of Hearing and Sight. We showed him the Way: whether he be grateful or ungrateful (rests on his will). (76:1-3)

They perform (their) vows, and they fear a Day whose evil flies far and wide. And they feed, for the love of Allah, the indigent, the orphan and the captive -(Saying) “We feed you for the sake of Allah alone: no reward do we desire from you, nor thanks.  “We only fear a Day of distressful Wrath from the side of our Lord.” But Allah will deliver them from the evil of that Day, and will shed over them a Light of Beauty and a (blissful) Joy. (76:7-11)

of Surah Ad-Dahr 33 times after Isha daily for 40 days.

And they will be given to drink there of a Cup (of Wine) mixed with Zanjabil -A fountain there, called Salsabil. (76:17-18)

of Surah Ad-Dahr 111 times after Fajr and  121 times after Isha daily for 27 days. (Note: In this Amal, feelings of jealousy/greed should be dropped and food should be distributed Fi’sabilillah after the desired purpose is fulfilled)

(iv) To get rid from bad company/habits and follow righteous ways, recite the verses

It is We Who have sent down the Qur’an to thee by stages. Therefore be patient with constancy to the Command of thy Lord, and hearken not to the sinner or the ingrate among them. (76:23-24)

(v) To soften a tyrant ruler/officer or get him transferred, recite the verses

As to these, they love the fleeting life, and put away behind them a Day (that will be) hard. It is We Who created them, and We have made their joints strong; but, when We will, We can substitute the like of them by a complete change. (76:27-28)

of Surah Ad-Dahr in congregation 1100 times after Zuhr in standing position for 21 days.

(vi) To attract the mercy of Allah in your life/work, pray 12 rakah Tahajjud (clean clothes) in such a way that after Surah Fatiha, recite the following verses

This is an admonition: whosoever will, let him take a (straight) Path to his Lord. But ye will not, except as Allah wills; for Allah is full of Knowledge and Wisdom. He will admit to His Mercy Whom He will; but the wrongdoers – for them has He prepared a grievous Penalty. (76:29-31)

of Surah Ad-Dahr 7 times in each rakah. After finishing the Salah, recite the above verses again 41 times and supplicate to Allah by heart for the desired purpose.

(ii) Drinking water in which this Surah has been dissolved is good for those with heart problems.

76.16 In the books of Amliyat Ulama have stated that, by the permission of Allah-

(ii) Reciting Surah Ad-Dahr on Friday 7 times can allow a person to see his place in the heavens before death.

(iv) To treat hiccups or piles, one should keep its Naqsh with him.

2 thoughts on “Benefits and Virtues of Surah 76 Al-Insan”