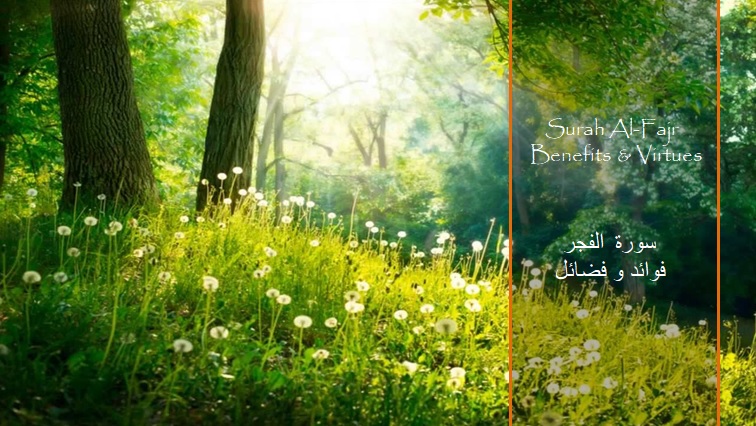 Commentators like Sayyidna Ibn ‘Abbas and Ibn Zubair (رضي الله عنهم) say that the word is general, and it refers to any dawn. According to another narration of Ibn ‘Abbas, it refers to the dawn of the first of Muharram which is the start of the lunar-Islamic calendar. Sayyidna Qatadah among others, has interpreted it in the same way. Some commentators, like Mujahid and ‘Ikramah, refer this to the dawn of the Day of Sacrifice on the tenth of Dhul Hijjah.

It has been confirmed in Sahih Al-Bukhari from Ibn Abbas (رضي الله عنه) that the Prophet (صلى الله عليه وآله وسلم) said, “There are no days in which righteous deeds are more beloved to Allah than these days (meaning the ten days of Dhul-Hijjah). They (the companions) said, “Not even fighting Jihad in the way of Allah” He replied, “Not even Jihad in the way of Allah; except for a man who goes out (for Jihad) with his self and his wealth, and he does not return with any of that.”

No! But you treat not the orphans with kindness and generosity (89:17)

Abu Dawud recorded from Sahl bin Sa’id (رضي الله عنه) that the Messenger of Allah (صلى الله عليه وآله وسلم) said, “The guardian of the orphan and I will be like these two in Paradise.” And he put his two fingers together – the middle finger and the index finger.

Ibn Abi Hatim recorded from Ibn ‘Abbas that this Ayah was revealed while Abu Bakr (رضي الله عنه) was sitting [with the Prophet (صلى الله عليه وآله وسلم)]. So he said, “O Messenger of Allah! There is nothing better than this!” The Prophet then replied, “This will indeed be said to you.”

Recite Surah Al-Fajr, which is Husain ibn Ali (عليهم السلام)’s Surah, in your prayers, whether they be obligatory or optional. He who recites it will be with him (Husain ibn Ali) at the same place in Heaven on the Day of Judgement.

One thought on “Benefits and Virtues of Surah 89 Al-Fajr”

📗 Salah in Quran
📗 Islam in one verse of Quran
📗 Virtues of Quran
📗 Smoking is Haram
📗 Sunnahs of food
📗Benefits of Surah Al Kausar
👑 Earn good deeds worth sending the #Salawat 6 Lakh times
🛐 Dua for forgiveness (Syed-ul-Istighfar)
⛲ Durood for provision from the fountain of Al-Kawthar
Loading Comments...
%d bloggers like this: